Home › Story of Each Gem! › Semi-Precious Gemstone – Every GEM has its Story!

Dendritic Agate – Every GEM has its Story!

Boulder Opal – Every GEM has its Story!

Guide: Standard Necklace Length Size Chart – Picking up Perfect Chain! Buying a Necklace is every woman’s dream. The Necklace is no
Read More

Guide: How to Get Stuck Ring Off a Swollen Finger?

Guide: How to Get Stuck Ring Off a Swollen Finger? Do you remember when did last time you take off your ring from your finger? I understand
Read More

Preface and Origin of Semi-Precious Gemstone – 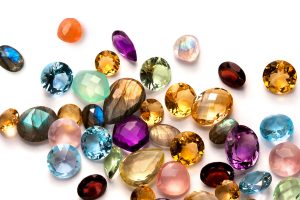 Semi-Precious Stone or Gemstone, as they are commonly called, are Mineral Crystals which, when cut and properly polished are used for Various Purposes such as Jewelry and other Precious Ornamental. Sometimes other Organic material and Rocks are also Categorized as a Semi-Precious Gemstone.

There is a very slight Distinction between Precious and Semi-Precious Gemstones. In today’s time Diamonds, Ruby and Emeralds are considered as the Precious Stone which is more valuable than Gemstones which comprises of other remaining Stones.

My Quality and Trait –

The Semi-Precious Gemstone is hard Stones their value ranging from 6 to 9 on the Mohs scale. They are usually Crystal of various shapes having vitreous to waxy luster. These minerals are cut in Various Shapes for the purpose of selling them as Ornamental, Sculptures and other art forms. The most popular Shapes of Gemstones are Oval, Round, Cushions and some are even cut en Cabochon to give it the very popular cat’s eye shape. The two popular ways in which a Gemstone is Cut are Cabochon and Facets. In Cabochons, Stones are cut in a Smooth dome-shaped whereas facet Stones are cut with faceting machine polishing window flats.

Transparent Gemstones are usually Faceted to maximize their refractive Properties which enhance the beauty of Crystal. These Gemstones are categorized in different groups and varieties.  Ruby is the Red colored corundum whereas the other shades of corundum are grouped as Sapphires.

Semi-Precious Gemstones are also grouped on the basis of their Physical and Chemical Properties. Based on their transparency and luster these are grouped into ‘First Water, Second Water, Third Water ‘and so one.

First water Gemstones are the ones that have a pure luster and extremely high transparency. Semi-Precious Gemstones are desired for their beautiful colors. Some Gemstones have natural colors whereas others are treated to bring out the Desired Shades.

Often time’s Gemstones are treated either with heat or radiation to enhance their luster, clarity and color. Heating is one of the most common and preferred methods. Most of the Tanzanites are heated at low temperature to remove the brownish impurities giving the more desirable blue and purple color. Prehnite is usually colorless or grey colored; it is treated with heat which gives it a Beautiful apple green color.

Radiation is another method used to enhance the quality of Gemstones. London Blue Topaz, in its pure form, is colorless; this when Irradiated give the Brilliant Blue and dark blue shades of Topaz. Green Quartz is commonly treated with radiation to achieve the pretty Yellowish-Green Shade.

Emeralds often contain Natural cleft which is filled with colored wax or oily substances to make them appealing. Gemstones have a rare occurrence and therefore rank high in demands. Semi-Precious Gemstones are found in various parts of the world. The Burma Ruby is found prominently in Burma, Turquoise is a significant stone of Turkey, and Prehnite has its deposits in USA, Australia and China.

Stones have long been considered to possess Magical Powers along with their Legend and Myths.  It is popularly believed that Noah’s ark had Garnet Embedded in it; Aquamarine was used by the Romans to purify water.

Aquamarine is a soothing Stone and helps in fighting stress and anxiety. Topaz has a wide range of Shades from Orange to pink and yellow is said to be a Stone of mindfulness. It alleviates any kind of flawed needs and greed and fills the mind with positive energies.

Black Onyx is popularly used when dealing with heartache and feelings of emptiness. These Naturally occur in black and white but are dyed to get the famous jet black color. Pearls are definitely the most Famous among all the Gemstones. They have their significance in weddings and marriages and are popularly worn by the Brides. Gemstones can be Natural or Synthetic.

Synthetic Gemstones are similar to the Natural Loose Gemstones in their physical and chemical properties but are created in labs under controlled conditions. Cubic Zirconium is an example of the Synthetic Gemstone.  Semi-Precious Gemstones are valuable Stones desired for their appealing looks and Mystical Powers they carry with them.